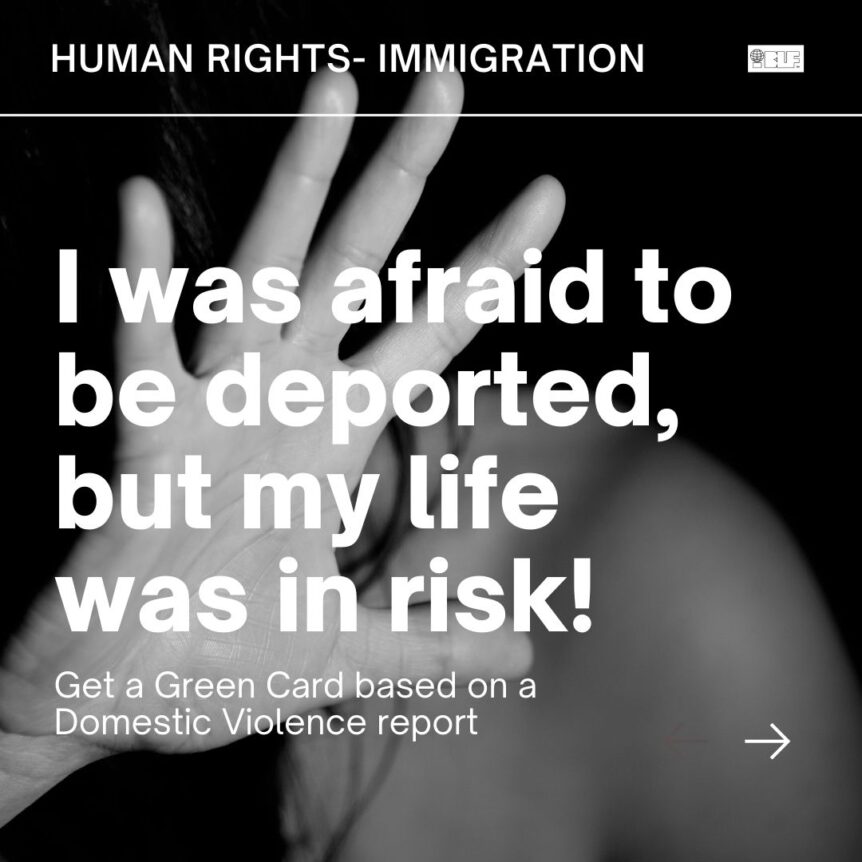 Her name is Claudia Perez. She is from Honduras. For many years, her husband abused her. Fear of being deported was so great that she allowed the situation to continue, until one day the lives of her children were also at risk.  She decided to, and did, report it.

Years earlier, when Claudia was 16 years old, she met Luis in Honduras. They lived together and intended to form a family. Three children were born.  Claudia relates, “Since the beginning of the relationship, he was always very possessive and jealous man. I had to do whatever he told me. He mistreated me, humiliated me, and threatened me all the time. Also, he betrayed me in different occasions. One night in 1998, when I was approximately 8 months pregnant with my youngest child, he got home drunk and tried to force me to have sex with him. I refused him and he punched me in the face, leaving me a black eye.”

After the birth of that child, Luis fled to the United States.  For an unmarried woman of Claudia’s young age living in poverty with a newborn and two other children, this was a very tough situation.

In 2005, having decided that it was time to reunite, Luis sent Claudia the money to join him in the US.  While crossing the border with a group of 10 people, Claudia was detained by a US Patrol officer and taken to a Detention Center. After being released, she continued her journey to Maryland where her husband was waiting for her.

Claudia explains, “Upon my arrival, I realized that he had not changed his mistreats in absolute. He continues being a jealous and untruthful man. He said that all my coworkers were my lovers. Luis controlled every aspect of my life. He would not leave me alone at all. When we were at home, he forced me to have sexual relations with him and was threaten me with the argument that if I called the police, they would deport me”.

One year after her arrival, she convinced Luis to bring all their children to the US, and, at the end of 2006, they had enough money to send for them.

In 2010 Claudia married Luis on his insistence that she of obligated to do so. One day Claudia recalls arriving home and finding Luis, again, with another woman, “That day I finally made the decision to not be with him anymore. We remained living in the same household, but no longer as a couple. Few weeks passed and one day he threatened to kill me if I did not go back to him and he took my passport to make sure I didn’t attempt to leave the country”.

In August of 2011, Luis locked Claudia in a bathroom at home. He threatened her by saying that if she continues refusing him, he will send someone to Honduras to murder her parents. “I was very nervous and extremely frightened. He would constantly tell me that he was going to kill me and that I did not deserve to live”, she remembered.

One day, Luis went to Claudia’s workplace and, there, tried to take her by force. He accused her of having multiple lovers and to be the mistress of one of her co-workers. Claudia shared her situation with her boss who advised Claudia to file a complaint in court against her husband.

On October 17, 2011, Claudia filed the complaint, a restraining order was issued against Luis and the police arrested him at their home. However, Luis was soon released. A few weeks after this incident, Luis began stalking Claudia as she made her way to work.  She reports,  “Every day he was waiting for me at the Twinbrook Metro station. I got very nervous when I saw him. He would constantly come up to me threatening that if I do not remove the restraining order against him, his brother would take care of the murder of my parents in Honduras. I would tell him that if he did not leave me alone, I would call the police, but the situation was turning worst with the time”.

The night of February 15, 2012, around 11:00 P.M., upon arriving from work, Claudia found the police at her home. The detective informed her that she was in danger, offered her protection and took the family to a shelter. Claudia writes, “During the days that we were in the shelter, Luis had no idea where we were. He would send me text messages asking me where I was and why I would not answer him. We remained at the shelter for eight days, but I had to return to work and my children to school. I figured that after a few days, everything would be fine”.

When Claudia and children returned home, the police continued their investigation. Some weeks later an officer visited Claudia to explain why she and her children had been taken to the shelter.  The investigation revealed that Luis had hired someone to kill her on March 6, 2012, and in the plot of the assassination, one of her co-workers was involved. The day Claudia learned of the intended assassination, Luis was arrested and taken to jail.

The nightmare did not stop when Luis was in jail.  He sent letters from prison, regretting everything he had done and pleaded for forgiveness. “He would also write that if I wanted to help him, to not show up to the court hearings on the days that I had been scheduled for. I never answered any of his letters nor did I pay mind to anything he said, but it did affect me a lot. All the letters that Luis sent, I turned them over to the State Attorney”.

United States is the country with the biggest immigrant population in the world, 50 millions 776 thousands 970 to be more specific, followed by Germany with 12 millions 165 thousands 083, and Russia with 11 millions 651 thousands 509, according to the World Population Policies report, published in 2018 by the United Nations.

The foreigners considered this nation as a first option for the numerous opportunities to find a better quality of life and to build a future for their families. Normally, they will never think of the risks of making the choice to navigate in unknown waters, but sometimes, this decision can turn dangerous.

In the study “Female migration and social reproduction in the United States”, wrote by Alejandro Cabriles for the University of Guadalajara in 2016, it establishes that immigrant women are more than the half of all immigrants in the US. Latin women represent the 46% of the female immigrant population, overcoming Asian countries (31%) and far above the female migration coming from other world regions.

According to a report published by the Center for American Progress, immigrant women (documented and undocumented), launched businesses in greater proportion than women that were born in the US. Also, they motivated their families to get their American citizen. But this study found that these females are especially vulnerable to abusive partners who used the woman’s immigration status to prevent them from leaving an aggressive marriage or relationship and are victims of human trafficking.

The good news is that there are options to obtain a Green Card and a legal immigration status without forcing these victims to live with these constant risks. They are the U Visa and the VAWA application.

The Violence Against Women Act (VAWA)

The Violence Against Women Act (VAWA) application form is the USCIS Form I-360 and in some cases where the individual applicant is married to their abuser who is a US citizen and, they can file the I-485 USCIS application for an adjustment of their citizenship status at the same time.

VAWA protects anyone who is a victim of actual or threatened domestic violence, dating violence, sexual assault, or stalking, or an “affiliated individual” of the victim; and living in, or seeking admission to, a federally assisted housing unit covered by VAWA.

To qualify for VAWA cancellation of removal, a victim must prove:

-He or she has been battered or subjected to extreme cruelty by a U.S.-citizen or Legal Permanent Resident spouse or parent.

-Physical presence in the United States for 3 years.

-That removal would cause extreme hardship.

In the other hand, the U visa can help certain crime victims feel safer reporting crimes, even if they do not have lawful immigration status.

To qualify for a U visa, a victim must submit a signed certification from a law enforcement official. This certification (known as USCIS Form 1-918, Supplement B, U Nonimmigrant Status Certification) is evidence in support of the petition to USCIS for U nonimmigrant status. The certification gives USCIS basic information about the qualifying criminal activities” perpetrated against the victim.

Certification is also evidence of the victim’s willingness to assist in the detection, investigation, prosecution, conviction, or sentencing

Life is a right, choose to live

The nightmare that Claudia lived for so many years is also the reality of many immigrant women in the US. Take courage. It is hard, but there are always options for the people who choose to accuse their prosecutors.

No one has the right to abuse another. Never forget that walking away from something unhealthy is brave, even if you stumble a little on your way out the door. Look for help and if you know someone in a similar situation, invite her or him to book a consultation with an attorney.

By Rosa Hernandez with information of USCIS

This is a real story, the name of the victims are fictitious to protect their identity.